Surest Way to Get Nothing Done: Load Teams to Capacity

By Keith Klundt - October 16, 2013
Among the many great topics in his book The Principles of Product Development Flow, Donald Reinertsen talks about controlling flow under uncertainty and the danger of congestion.  While WIP constraints help manage the flow of value from a system, by themselves they do not ensure that the system is at a high-throughput operating point.
These diagrams show the corresponding effects of hitting full capacity on throughput and delay: 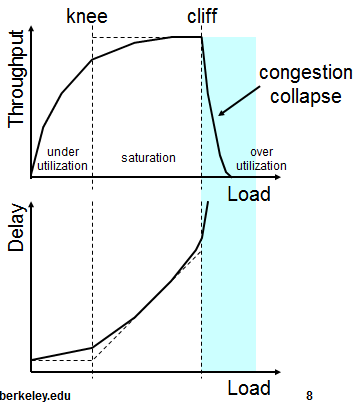 Knee - point after which
Cliff - point after which
Simply put: when we cram too many projects in the product development pipeline, we create queues.  These queues create a frictional drag on throughput as developers spend more time expediting and less time adding value.  The added load reduces output instead of increasing it.  When the project load hits a critical point, we will see a sudden and catastrophic drop in output.  As system utilization increases toward that critical point, throughput increases by progressively smaller amounts.
Reinertsen identifies 3 principles to help avoid the congestion that leads to collapse in throughput: